Guard against climate complacency: COVID-19's environmental 'silver lining' and a lesson from the Boxing Day Tsunami of 2004.

In times of crisis it is only natural to look for silver linings. As COVID-19 sweeps through human society, claiming lives and leaving a trail of economic chaos in its wake, people have clung to stories that put a positive spin on a terrible situation. In some places the absence of people has made space for nature to reclaim its place. Here in Vancouver, the sudden absence of ships and seaplanes has meant that orcas have been spotted in areas they would usually stay well-away from. It’s stories like these that give us a glimmer of positivity amid all the turmoil. Our predisposition to share things that make us feel a little more 'ok' is really strong: so strong that in some instances it’s led to viral fake news. A similar story of dolphins in the canals of Venice turned out to be too good to be true. One thing that is undeniably true, though, is that pollution levels are way down in some of the most heavily polluted areas of the world, thanks to the total shutdown of industry. And while this seems like really good news in the short term, news that's worthy of sharing far and wide, it’s worth thinking critically about what this drop in pollution teaches us about our economy, and what might happen in the near future.

Orcas return to waters with renewed peace and quiet, shared on Twitter by @jimhanson_NV and @Womanwhovotes

It was a lesson I’ll never forget: when the sea disappears, you don’t hang around to wait for its return. You act to ensure your safety.

Every major crisis has valuable lessons to learn. In 2004 the Boxing Day Tsunami killed 230,000 people in 14 countries. Since watching that horrific event play out across the world media, there has always been one lesson that stuck with me. I’ll never forget the stories of how, shortly before the tsunami struck, people watched as the sea completely ‘disappeared’, receding miles from the shoreline. This eerie event was the ocean gathering its might before thrusting it upon land in an unstoppable deluge that would demolish coastal communities and ripple across the airwaves right around the world. It was a lesson I’ll never forget: when the sea disappears, you don’t hang around to wait for its return. You act to ensure your safety.

Today the fear is that, just as the ocean recedes before a tsunami, the brief respite from industrial pollution will be a foreshadowing of a deluge of fossil-fuel combustion to come, as the world’s major economies struggle to get back on their feet and get things back to ‘normal’. It’s reasonable to expect many governments to pump investment back into boosting economies in the only tried and tested way that they know: the same reliance on fossil fuels, modes of manufacturing and resource exploitation that have been going on for the duration of the industrial age. History suggests that this is exactly what will happen, while here in Canada, as elsewhere in the world, the debate is already raging on how to balance economic incentives with environmental protection. In the US, the Trump administration has already accelerated the rollback of standards regulating the fuel efficiency of cars, a move that could result in an excess 1,5 billion metric tons of climate pollution being pumped into the atmosphere in the next 20 years. 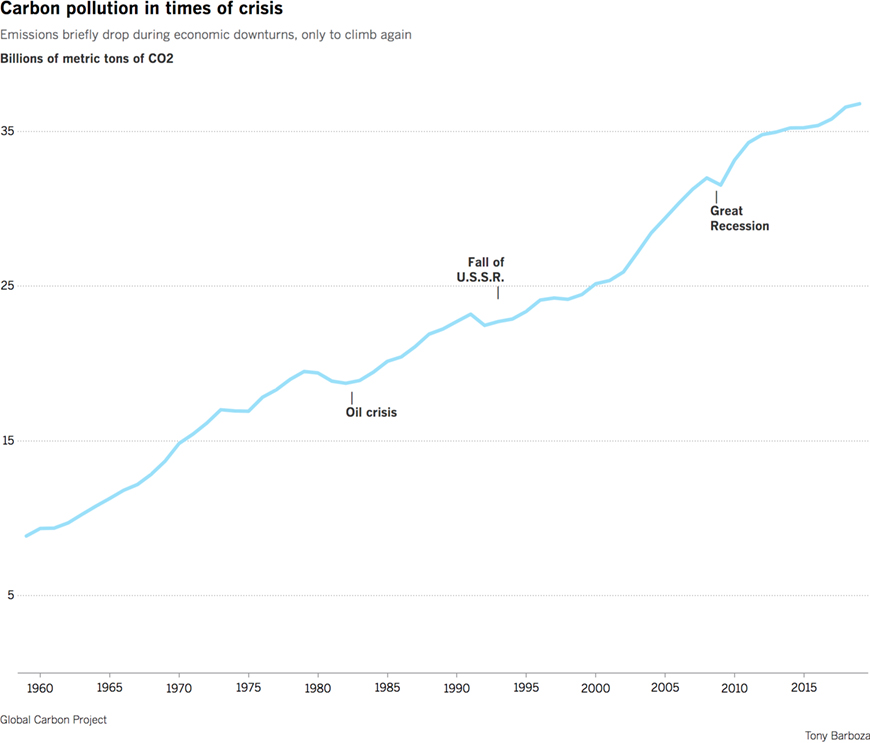 This graph from the Global Carbon Project shows the particularly steep upturn after the 2008 financial crisis.

Coronavirus has been devastating to many, and in our rush to return to life as normal it’s predictable that people might give less regard to climate in the way they live, shop, invest, and vote than they did in the pre-corona world. But just like the tsunami of 2004, this crisis has crucial lessons to offer. Many are relevant to the importance of accurate scientific information, or to strategies for the mitigation and control of disease. But one lesson seems more poignant than the others. That lesson lies in the fact that one of the only things to offer a silver lining in such a terrible time has come as the direct result of the near total shutdown of our economy. It is crucial that we emphasize and remember the link between ‘business as usual’ and the terrible effects on both our planet and the health of the very people who keep that economy turning. It is crucial we remember the link between the direct results of a fossil-fuel economy and the cost to human life. And it is crucial that we learn the lesson that that link teaches: that the way we have done things in the industrial age is fundamentally flawed. If we learn that lesson now, perhaps it will inspire us to redefine and redesign what business as usual looks like.

So what does that mean in practical terms? For us it means continuing on our mission to redefine ‘business as usual’ in the footwear industry. It means following through on our vision of carbon-negative footwear made with wine corks recycled through a system that we've worked for a decade to establish and optimize. It means setting an example and sharing the technology for others to follow our lead.

On an individual level it means making sure your voice is heard when it comes to telling your political leaders what’s important to you. Essentially what that means is voting for the people who will have the foresight and the strength of will to prioritize the long-term future of people by doing what it takes to fight for a stable climate. It also means doing what you can to lower your personal impact and consider the environment in the way you live your life. Most importantly it means staying aware that the difficulties we face now do not reduce the scale of the threat of climate change, neither do the silver linings of a global pandemic translate into long term climate security.