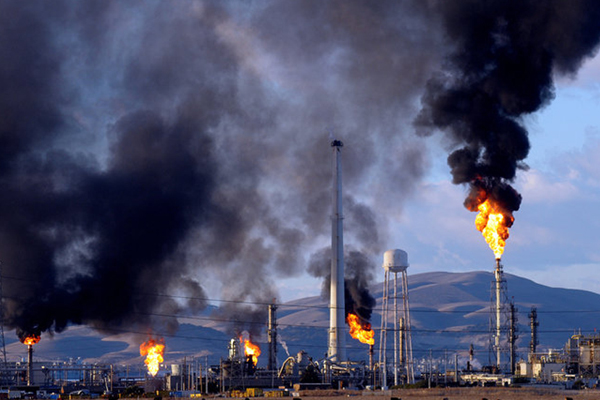 Your sneakers are made of plastic: it's time for a better alternative.

‘Plastic shoes? That sounds super uncomfy, no thanks.’ If this is your response we don’t blame you. When we think of plastic we think of things like shopping bags, single-use straws, water bottles and toys. You don’t see social media campaigns highlighting the plight of sea turtles choking on running shoes now do you? Well that’s just the thing; the foam in your sneakers might not look the same or feel the same as single-use plastics, but it comes from the same place: it's manufactured from petrochemicals derived from fossil fuels.

When you look at a clear plastic water bottle it's hard to imagine it starting out as a thick oozing black substance taken from the depths of the earth. The high tech foam in your sneakers makes you feel like you're walking on clouds, not wading through sticky sludge that's formed over millennia from compressed natural matter. But both materials are derived from fossil fuels, just like the gas you put in your car.

To make plastics, fossil fuels (like petroleum and fracked natural gasses) are processed through energy-intensive systems to produce petrochemicals like Ethylene and Propylene. These are then further processed and combined in different ways to create the many different plastics that people use, including beneath our feet. You may be familiar with the acronym PET. This is Polyethylene terephthalate, the plastic that single-use water bottles are made from and one of the most common types of plastics. Likewise one of the most common types of foam, which revolutionized the sneaker industry in the 70’s is EVA or Ethylene-vinyl acetate. Note the common use of the petrochemical Ethylene. The differences between PET and EVA are the other chemicals with which Ethylene is combined and the processes via which this happens.

So why is this a problem?

The billions of pairs of shoes produced every year contribute to the world's growing plastic pollution problem. But it's not just the end-life of these materials that's problematic, and in the context of the climate crisis you might argue that it's not even the biggest issue with petrochemical foams. The extraction and processing of fossil fuels has a major impact on the climate and is one of the most important drivers of global warming. Much of the discussion around global warming and climate change centers around things like replacing coal power plants with clean energy, or choosing electric vehicles over gasoline. But it’s not just powering our homes and cars that is the problem. As reported by the Centre for International Environmental Law, “if plastic production and use grow as currently planned, by 2030, these emissions could reach 1.34 gigatons per year—equivalent to the emissions released by more than 295 new 500-megawatt coal-fired power plants.” The same report reveals that in a single year the global emissions from producing ethylene alone are equivalent to 45 million passenger vehicles driven for one year and that’s just Ethylene, one of the many fossil-fuel-based components of plastics used around the world. The footwear industry needs to take responsibility and use cleaner, greener alternatives. So what’s the solution?

There are three ways to tackle the problem of petroleum-based foams in footwear.

The first and most effective solution is to almost entirely replace the petrochemicals in foam with a natural alternative. That’s what we’ve done with the new ReCORK recycled cork midsole. Our revolutionary formula takes used natural wine corks, grinds them up and combines them in such a way that we create a material with the cushioning, flex and durability to meet and exceed that of the foams used in your favorite sneakers. This process takes an incredibly sustainable material and gives it a second life in the shoes you wear, as a direct replacement for harmful fossil-fuel based foams. The manufacturing requires incredibly little energy relative to petrochemical foams and the result is a material that does all the things that synthetic foams can do, with a tiny fraction of the environmental footprint.

The second solution is to use foams that offset petrochemical requirements with other alternatives that are abundant and naturally occurring. That’s exactly what Bloom algae foam does, making use of the world’s fastest growing organism (algae) to replace some of the fossil fuels needed to manufacture their foam. While this solution only partially offsets its fossil-fuel requirements, it also has the added advantage of cleaning natural waterways in the process when algae is harvested from harmful algae blooms. 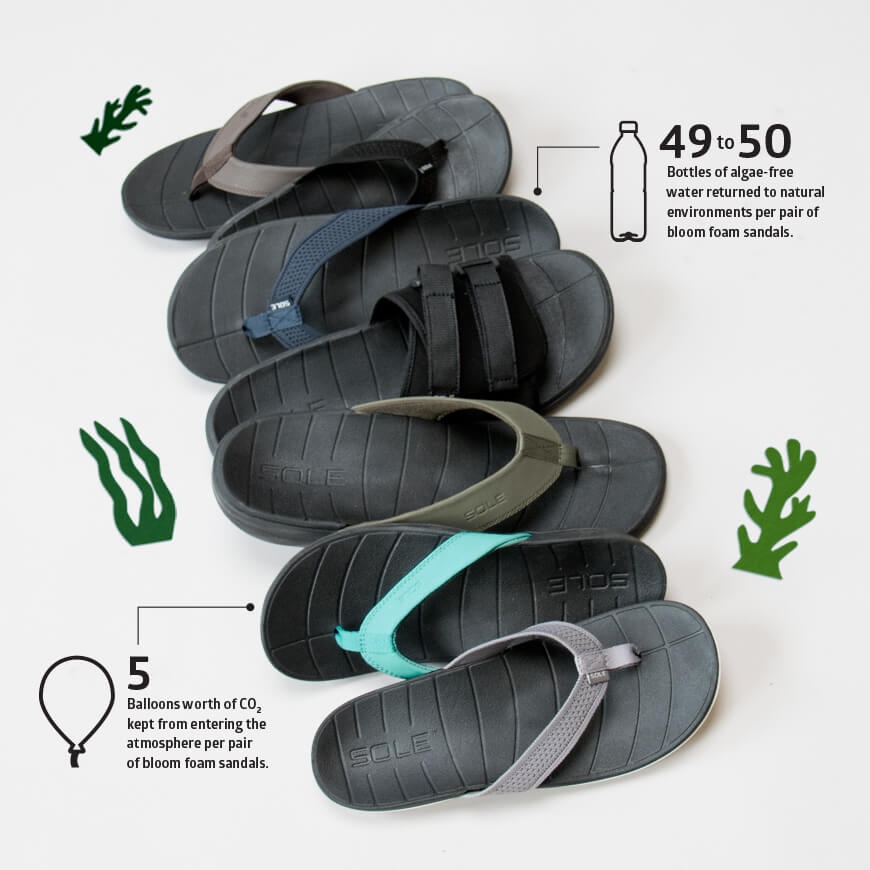 The third solution is to invest in carbon offsets to 'make up for' the impact made through the production of petroleum-based materials. This could be achieved via giving money to an organization that runs offset programs, or it could be done by directly investing in initiatives like tree planting. The benefit of this approach is that it's possible to offset the impacts of more than just a material, but the entire production and shipping process too. The problem comes with the challenge of getting clear and accurate measures of carbon output versus the amount trapped in offsets. It's also an approach that relies on the successful execution and management of offset programs to 'undo' the damage done by material manufacturing. This process is often outsourced to third-party companies and programs and difficult to effectively keep careful tabs on. While this approach involves taking responsibility for the damage done, it's far more effective to avoid doing the damage in the first place, as is the case with the ReCORK recycled cork midsole.

What are we doing at SOLE?

At SOLE we often speak about beginning a journey toward a greener future for footwear. We're incredibly proud of what we're doing with recycled cork, and we hope that we will have far-reaching positive effects throughout the footwear industry with this incredible material, but this is only one piece of a larger puzzle. We're in the midst of a constant process of improvement. It takes diligence and determination, but we believe that this is the only way to do business responsibly in the 21st century. We're excited to introduce plastic-free packaging in upcoming product runs (more on this soon) and we're also committed to creating thorough audits of our overall carbon footprint to best understand our company's impact and account for it.  We do all this so we can say without hesitation that our overall impact as a business is not only positive for people, but for the planet too.  Stay tuned. 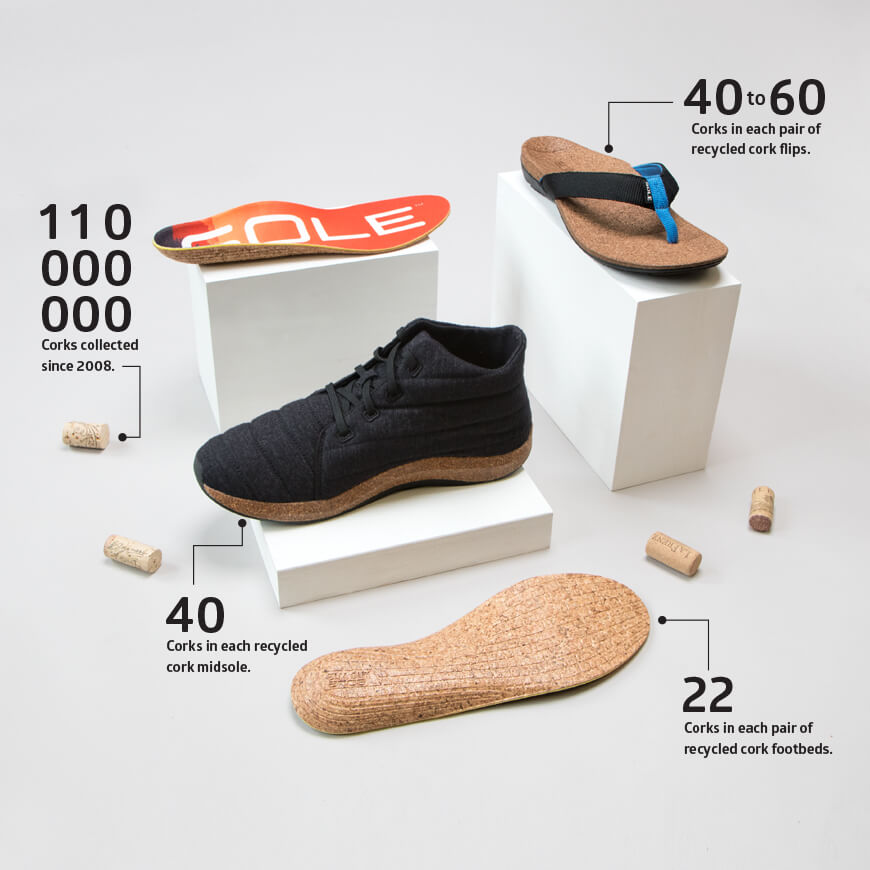